I just wanted to share with you guys something I ran across actually a few months ago. What is that? Grapeseed oil. I found it at my local Wal-Mart grocery store and decided to try it as I remembered reading rave reviews on it for natural hair back when I was a loose natural. Don’t worry as this oil is NOT going to replace my beloved coconut oil. There is another reason I wanted to try it as I’ve been looking for an oil that stays in a liquid state to blend with my herbal coconut oil mix. I figure that would help in keeping it “soft” in the winter. What do I mean by “soft”? Because of the saturated fat in coconut oil, it becomes a solid at temps below 77 degrees F. Since I’ve started using my coconut oil infused with herbs, you can see what herbs I use here, the herbs seem to help the oil stay soft.  I just wanted to see if I could improve on the “soft” with an oil I can find locally and reasonably priced. This mix is the only thing I’m gonna use the grapeseed oil for. And as y’all already know and if you don’t, my hair does not like olive oil.  I may be infusing this grapeseed oil with some of or all of the herbs that I use in the coconut oil at a later date but for now, I’ve put some in with my already infused coconut oil.

Well this is an update as I had already started this post shortly after trying this new oil. After several months of using this grapeseed oil mixed in with my herbal coconut oil, I’m not crazy about it. To me, the consistency is a little to close to olive oil for my liking. Basically that means just a little bit too heavy and the smell is almost like olive oil.

Now I’ve looked around on the internet and everything I’ve read says this oil is odorless so maybe it’s the brand that I got or the bottle ended up in the olive oil conveyor belt and got mis-labeled. 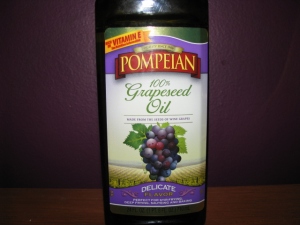 It was only $5 for a 24 ounce bottle so that may have something to do with it but again from what I’ve read, grapeseed oil is inexpensive compared to extra virgin olive and coconut oil. That being said,  I’m not sure I’ll be trying another brand on my dime. So, I’ll be using the remainder in a mix for skin use only, or and sticking with my herbal coconut oil.

What is your favorite oil for your hair? Vote in the poll and tell me why in the comments.